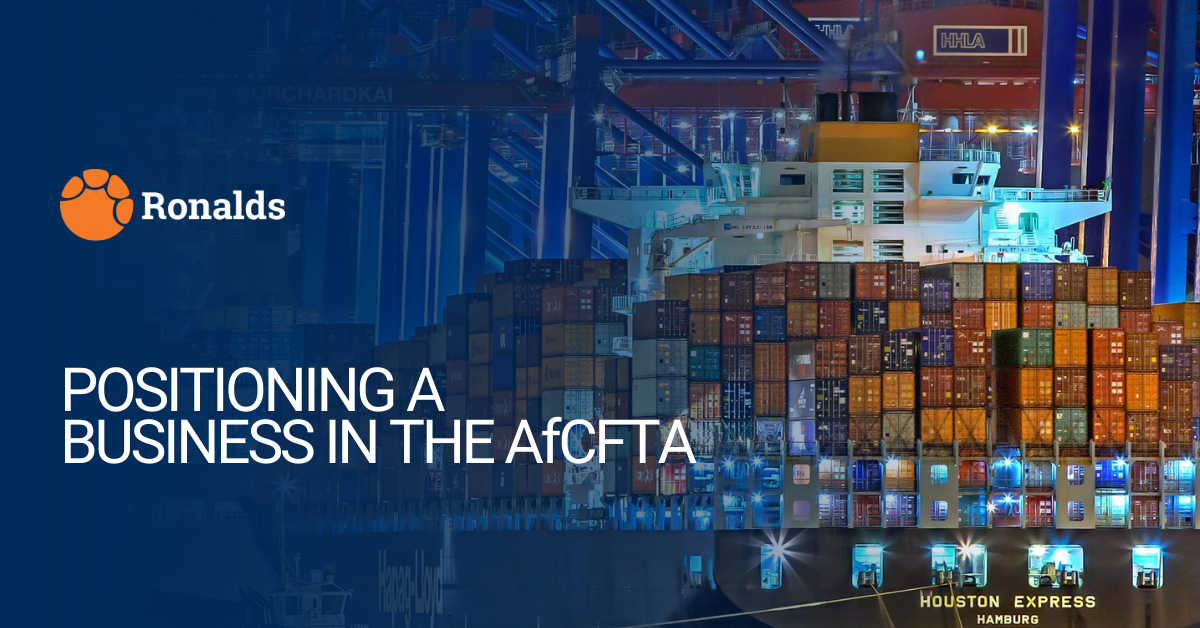 The African continental free trade area (AfCFTA) is a determined trade pact ready to form the world’s largest free trade area by connecting almost 1.3 billion people across 54 African countries. The agreement aims to create a single market for goods and services in order to deepen the economic integration of Africa and, also present a unique opportunity for trade and possible trade diversion into the continent.

The overarching objective behind the AfCFTA is the elimination or reduction of tariff and non-tariff barriers amongst the 54 countries that agreed to be member states of the bloc by providing a single market for goods and services, facilitated by the movement of persons in order to deepen the economic integration and prosperity.

The AfCFTA is one of the flagship projects of the African Union’s Agenda 2063, a key program and initiative that has been identified to accelerate Africa’s growth and development, aimed at boosting intra-African trade and the continent’s trading position in the global marketplace.

To prevent a sudden stop of current account flows, improving the trade deficit is a necessary first step for AfCFTA to reach its objectives. To achieve this, lowering import barriers for pandemic-related products would have the advantage of providing larger market sizes for exporters while guaranteeing consumer sufficiency and cheaper alternatives for importers. For AfCFTA to achieve other intended impacts then the following must be done;

African countries should also have in sight the potential for a Customs Union arrangement as a starting point to further the benefits of the free trade area and relax the constraints of complex rules of origin. While this is ongoing, the AfCFTA phase one negotiations that are currently being firmed up at individual country levels including tariff concessions, rules of origin, and service sector commitments and phase two negotiations addressing investments, intellectual property rights, and competition policy should be underway.

The AfCFTA seeks to achieve a single market model in the future rather than stick to a customs union, hence the need for product-specific rules of origin and regulations on standards that would prevent sub-standard and cheaper products from dominating a member state’s market. The single market is an internal market allowing the free movement of goods, services, financial capital and human capital. The AU must thus ensure standardization of product quality across the continent and also enable the pan-African passport to ensure free movement of people across the region for the provision of non-tradable goods like baking and catering.

Currency trades in the AfCFTA will likely be denominated in US dollars. The use of the globally dominant trade currency would ease administration and transaction processing and limit traders’ return volatility due to currency conversion and uncovered domestic currency interest rate differentials. The impact of using the dollar as the dominant trade currency will bring some changes to some of the member state countries forcing them to either adjust their exchange rate or give up their independent monetary policy.

Positioning Businesses in the African Market

Although there is a net gain from the continental free trade agreement of Africa, African countries will not equally benefit. This will result from differences in GDP, patterns of growth, and efficiency in investment. Tariff removals will also lead to lower product prices for consumers which may have negative effects on countries’ earnings from tax. Tax revenues currently account for about 17.2 percent of GDP in African countries. Increased trade volumes may create other opportunities for value-added taxes within African countries, which may thus compensate for customs revenue losses due to the AfCFTA.

With plans on harmonization of trade blocs and a lift in trade barriers, the AfCFTA will help businesses not only develop regionally but also across the continent. Businesses can benefit from this through:

The political economy resulting from diversity along economic, cultural, and institutional dimensions will have an impact on the level of integration resulting from the AfCFTA. An effective preferential trade agreement will increase trade among members by reducing tariffs between members, eliminating most non-tariff barriers, and promoting trade facilitation. This will help in growth of businesses and expansion in the regional market hence, the need to take advantage to expand the firm in Africa. The only disadvantage is that, the trade facilitation component is the most difficult to accomplish, particularly if the level of integration is shallow. At a deeper level, integration requires cooperation between governments and people: to foster peace and security, conserve shared natural resources, develop and manage regional infrastructure, and share systems of rules and policy regimes. Integration thus provides regional public goods. These forms of cooperation call for collective action, which requires trust and some supranational delegation of authority.