Over-reliance on inquiry as a form of audit evidence 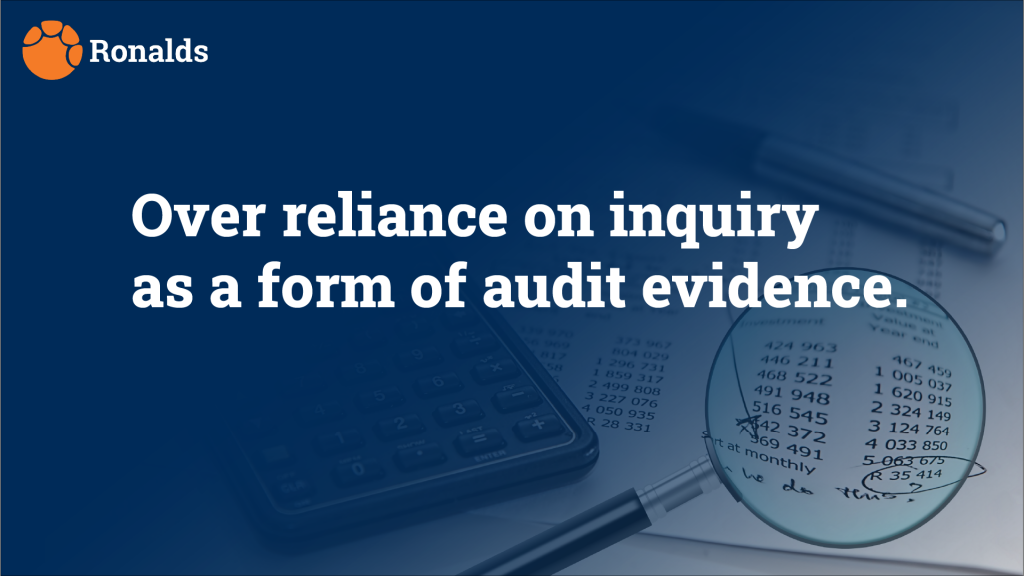 THE MAJOR PROBLEM FACING FINANCIAL AUDIT & THE REMEDIES TO THE SAME

Inquiry is an audit procedure that is used extensively throughout the audit and often is complementary to performing other audit procedures. Inquiry consists of seeking information of knowledgeable persons, both financial and non-financial, throughout the entity or outside the entity. Inquiries may range from formal written inquiries to informal oral inquiries. Evaluating responses to inquiries is an integral part of the inquiry process.

However, the over- reliance on this information can be hazardous.

Why hazardous you ask? Well, the next few minutes of this read will tell you just why.

Audit is supposed to be a very engaging process and that is why conducting a field visit is key. However, some auditors are plagued with a disease I like to call “Traditional auditing.” This by any chance is not your normal audit definition of using traditional tools and techniques instead of using your normal Computer aided audit techniques (CAATs) but rather carrying out a “basic” audit.

Fundamental, rudimentary, primary, principal. These are some of the synonyms to the word basic. But hey, the world is changing and as the audit world is changing the formal and informal streets have developed new meanings to primary words such as basic. My definition of a basic audit characterizes an audit that is unoriginal, unexceptional or even main stream. Just basic.

Basic auditors just strive to get the job done. This is the main objective of the audit or even any task one is handed don’t get me wrong. This is however a big problem as basic auditors dwell mostly on the when rather than the how. They tend to focus on the fastest and easiest route to complete the assignment which brings me to my point folks.

Over-reliance on client information is a common tool basic auditors use. They switch off their professional skepticism and rely on information provided by the client. Take a scenario of two auditors for example conducting an audit. Auditor A requests the client for the Organization’s financial statements. Auditor B on the other hand requests for system log ins and by doing so, extracts the financial statements from the system himself. Jump to scenario B with our two auditors. Auditor A compares the balances of the cashbook with those in the bank statement with the aim of ascertaining that bank reconciliation has been conducted accurately. Auditor B on the other hand conducts analytical procedures where he instigates recalculation of balances both on the bank statement and cashbook to ensure that bank reconciliation was accurately done.

At the end of the day, both auditors will appear stuffed but the begging question will always be who between the two auditors has fed on the right diet. We all know that a healthy diet is a major factor when it comes to keeping diseases and infections at bay. By now folks I hope you can identify the auditor who has lived unhealthily otherwise the last minutes of you reading this piece have just gone to waste.

The bottom line is, over reliance on client information should be curbed by whatever means necessary.

It doesn’t take a genius or it isn’t rocket science to do this but just going back to basics. I know right, that word again, basic, only this time we go back to its dictionary meaning of Fundamental, rudimentary, primary, principal. The basic traits should involve the auditor portraying the highest level of professional skepticism or what my fellow auditor calls, thinking like a thief. This will widen one’s scope and by doing so limit the amount of errors and material misstatement that the auditor during his time will fail to detect.  My other recommendation is just being updated and gathering a lot of information in the related field to not only detect fraud and errors in financial statements but also provide advisory services relating to also areas of governance, legal and regulation.