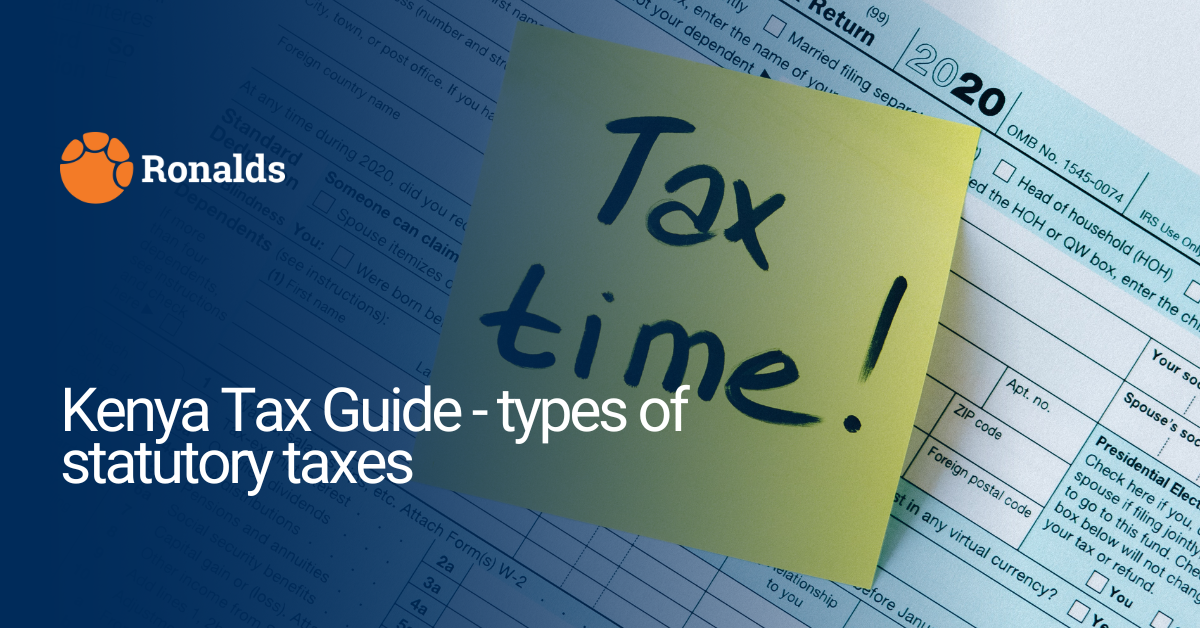 All That You Need To Know About Taxation in Kenya In the words of Calvin Coolidgu “collecting more taxes than is absolutely necessary is legalized robbery” But nonetheless, as responsible citizens, we pay taxes, perhaps sometimes more than we consider necessary.  In that light, the statutory taxes in Kenya can be focused upon.

Any tax or duty payable to the Kenya Revenue Authority (except VAT and duty on imports) may be offset on request against any refund of tax or duty confirmed by the Authority. The request must be made 30 days prior to the tax due date. Tax paid in another country on employment income by a Kenyan citizen can be offset against tax payable on that income in Kenya to the maximum of tax payable in Kenya on the said income. Types of Statutory Taxes In Kenya

The organization vested with the right of collecting, assessing and accounting for taxes in Kenya is called the Kenya Revenue Authority. Taxes in Kenya are categorised under two main heads, direct and indirect taxes.  The indirect statutory taxes in Kenya applies when the purchase of goods are made. The various taxes under this banner are excise duty, custom duty & levies and V.A.T. On the other hand, income tax falls under the direct taxes in Kenya.

Pay as You Earn (PAYE)

PAYE is one of the many statutory taxes in Kenya collected from individuals engaged in gainful employment. Under this, the employers make a deduction of a particular percentage from the salary. This percentage is forwarded to the KRA on a per month. Of the many statutory taxes in Kenya, PAYE applies to bonuses, director’s fees, commission, weekly wages, monthly and annual salaries. A personal relief, that is a tax credit is provided to every resident employee under PAYE. In addition to that insurance relief and mortgage interest deductions are also provided to qualifying employees.

Yet another of the many taxes in Kenya is the Corporation Tax. Under this tax, the companies operating in the country pay a charge on their total income to the KRA. The indigenous companies have to pay a change of 30 percent while branches of non-resident companies are charged 37.5% on their taxable profits.

This is the most popular of the many statutory taxes in Kenya. According to this regulation in Kenya, VAT is a consumption charge which is imposed on any taxable goods and services. The consumer who makes a purchase of a service or a commodity is bound to pay the VAT.

International trade is on the rise for some time in Kenya. This is largely due to the current development in the oil and gas industry. This has been boosted by the expansion of the manufacturing entities in the country. The custom and excise duties are administered under the heads of two acts in Kenya. They are the Custom and Excise Act 2010 and the East African Community Customs Management Act 2004. Excise duty in Kenya is managed under the Customs Cap 472 which came to force in 1978.

However, there might be a change in that end and a new autonomous excise duty act for the administration of Excise duty in Kenya might be enacted.  In general excise duty is imposed on certain imported goods and a few locally manufactured ones. In addition to that, excise duty is also levied on certain services which fall under the Fifth Schedule of the Customs and Excise Act. Some goods which incur excise duty include wine, bottled water, soft drinks and cigarettes.

These include import duties such as excise duty, VAT, import declaration fee and railway development. Customer duties are charged to the importer of the goods at the point of the importation. The importers are required to accurately compute and pay the taxes based on the applicable charges. Generally, when goods are imported VAT, import duty, excise duty, import declaration fee, railway development fee, raw material, intermediate goods and finished goods are applied.

These are one of the many taxes in Kenya and is charged on interests, dividends, pensions, performance fees, royalties, commissions and so on. However, the rates of the taxes collected are not fixed. They vary according to the status of the payer. That is whether or not he/she is a resident.

This is yet another form of a direct tax that falls under the category of the statutory taxes in Kenya. These taxes are directed towards the public service vehicles and commercial vehicles. The owners are expected to pay the taxes in advance before they can get their commercial vehicles registered.

This is one of the property taxes of the many statutory taxes in Kenya. The Residential Rental Income Tax is one of the multiple property taxes which fall under the income tax umbrella. The Finance Act of 2015 defines this tax as the amount to be paid for the accrued incomes collected from the residential properties of Kenya.  However, the amount should not be over than Kshs 10 million per income year.

Kenya attracts a lot of foreign investments particularly from the multinational organizations which are willing to make an entry in the East African market. This has led to a heightened level of complication in the taxing structure. To ensure that the multinational companies continue to invest in the country and contribute a fair share of tax, the KRA has concentrated efforts to cut down and obstruct accounting malpractices which results in reduced tax liabilities.

In addition to the already mentioned statutory taxes in Kenya, a few more laws focus on corporate entities. There are a few rules and regulations which guides the operations of the various corporate entities of Kenya. An organization which aims to conduct business in the country can either operate as a company or a branch. All the corporate entities are guided by the Companies Act. A person wishing to establish a corporate entity in the country must submit the necessary documentation such as memorandum, details of directors and shareholders and such.

The Companies Act of Kenya also entails the responsibility of the Registrar of the company. The former is held responsible for registering incorporated trusts and business names.

While dealing with the corporate entities of the country, there are certain sector-specific rules to be followed. Companies operating in certain sectors or industries may be expected to obtain certain additional licenses from relevant operating bodies. For example, the various banks of the country fall under the jurisdiction of the Central Bank of Kenya directed by the Banking Act. In addition to that, the Capital Markets Authority is charged with the responsibility of issuance of shares to the public.

Use of The Various Statutory Taxes In Kenya

History of Taxes In Kenya

The statutory tax measures of Kenya dates back to the pre-colonial era. This was a time when people paid tithes to trade with tribes in different territories. At that time the primary traders were the Portuguese and the Arabs. The taxing structure of that time was fashioned after the Islamic laws and the then trade rules. Under the established taxing structure the locals and the resident had to pay Sadaqa, Jizya and zakat. This three were mimicked from the Islamic laws. In addition to that harbour fees, capitation tax and such had to be paid. The taxpayers from that time were under two categories, Muslim followers and account holders.

With the advent of the British in the East African Protectorate, including Kenya, the taxation system went through certain modifications. Few parts of the Arab and Portuguese taxation laws were included and a new structure was built. The new system had the following changes incorporated:

When Kenya gained independence, the statutory tax structure included trade, income and excise duty. The first ten years of the independence were spent on developing a sound taxation structure. By the year 1973, sales tax was made a part of the taxation system. However, the government had to go through certain rough patches due to the oil crises for which fiscal reforms were introduced. Around the same time, the government launched a 10 percent withholding tax and a 10 percent cuts on goods that were under the duty-free category.

With the fall of the EAC in 1977, the sales tax were increased to 15 percent, excise duty to 59 percent by the Kenyan government.In the year 2000, the government set a benchmark of collecting 24 percent of the GDP as taxes. Thus the consumption aspect was focused upon. As a result, progressive income tax became operative. Individuals with low-income group paid 10 percent whereas the high-income group were charged 65 percent. In addition to that, the income tax of local companies was set at 45 percent and the taxes for foreign companies were set at 52 percent.

We understand that law is a tricky affair, so if you ever face any issue regarding taxing taxation get in touch with Us.